The First Day of First Grade 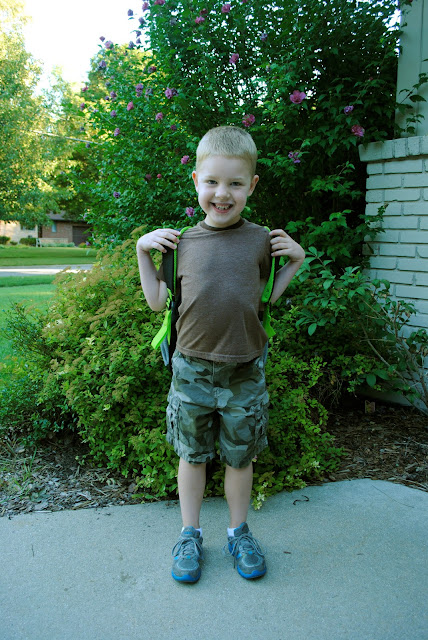 So yesterday was the day.  This guy was off to first grade.  And I was left feeling like "we have arrived."

Kindergarten was a big deal, don't get me wrong.  We all loved kindergarten.  I can go on and on and on about how much Drew grew and how much he learned and all really good and important stuff.

Well, then...I have a hunch I'll be saying this every year!  This fall just feels especially significant, for some reason.  Look at him!  He's growing up!  Which, honestly, I'm really only about 10% sad about.  I'm at a point where I am so looking forward to seeing him continue to grow that I'm no longer saddened that he isn't a baby anymore.  Despite the challenges we've had at this particular age, we are so incredibly proud of this kiddo.  And I cannot wait to see what this year will bring!

{Gracious.  What'll I feel like when we really hit the big leagues!?!?  You know, like second grade?!?!} 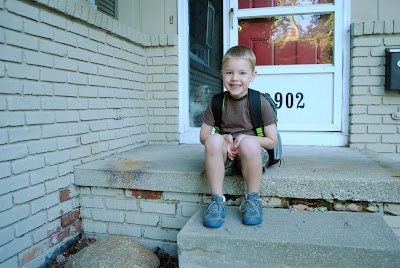 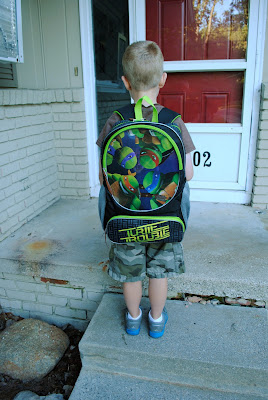 I had taken Drew to school on Thursday of last week, to meet his teacher, Miss Cooper, and to see his new classroom.  He's right across the hall from his kindergarten classroom (his school is really rather small) so everything is familiar.  There are 16 students in his class, which is a *huge* difference compared to the 28 in his class last year!  It's only Day 2 and it already feels more calm and peaceful in his room!  As a parent, I am so thankful for that!

So yesterday when he woke up, I had what will be our traditional "Happy First Day of School" special breakfast waiting for him at the table. 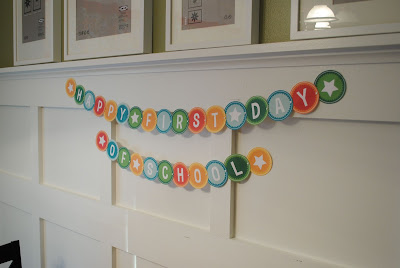 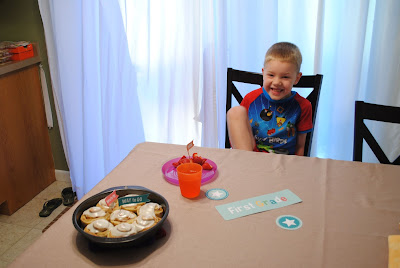 Thankfully, he wasn't just excited about the cinnamon rolls, but he was genuinely looking forward to going to school!  What a difference a year makes!  I packed up his lunch, he got dressed, brushed and combed, and we headed out. 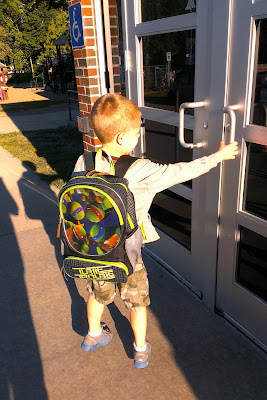 Seriously, how far this kiddo has come the last year.  Was he nervous?  Yep.  Was he a bit unsure?  Yep.  He thrives on routine, so after a few more days, when he knows what to expect and when to expect it, he'll be even more comfortable.  He hangs pretty close to me, but check him out, walking confidently into school yesterday!  We were the first to enter the classroom, so Drew found his nametag and his seat, and we waited as the other kids filtered in. 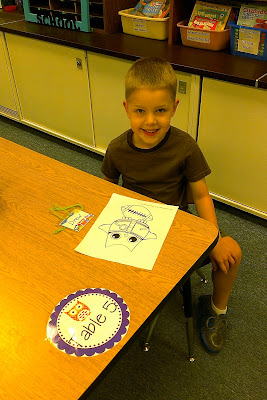 I love that it was that easy... I do ...and while I didn't want him to be all clingy and desperate and make it difficult for me to leave...I wanted a few more words than just "bye, Mom"!!  So I gave him a hug, said I loved him and to have a great day.  And I left with this guy really ready to begin first grade. 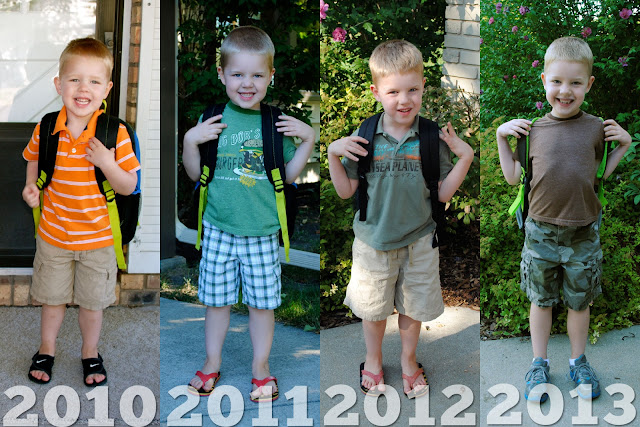 The first day of school the past four years.

Go ahead an oogle for a while.

Because I can't stop.